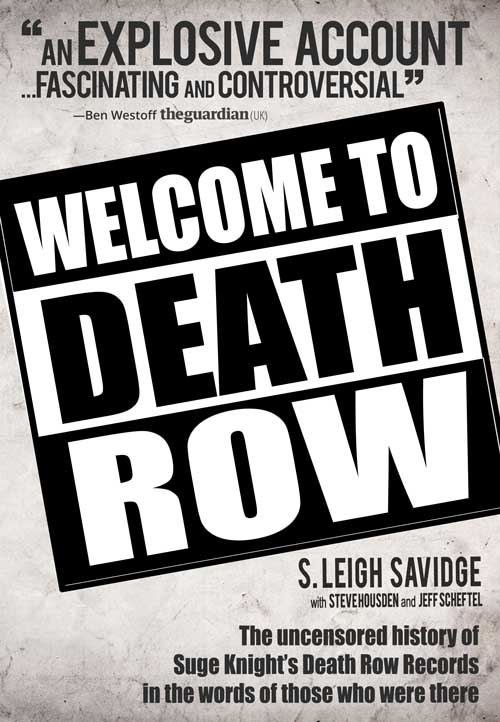 Welcome To Death Row:
The Uncensored Oral History of Suge Knight’s Death Row Records
The Most Dangerous Story In American Music, told in the words of those who were there.

“Welcome to Death Row is an explosive account of one of the most fascinating and controversial periods in music history, when rappers like Dr. Dre, Snoop Dogg, and Tupac Shakur made some of the most beloved rap albums ever. Featuring interviews with the scene’s important players, it details the rise and fall of Suge Knight’s empire in page-turning detail. It’s a fantastic companion piece to the documentary, offering brand new revelations from this combustible era.”

The Uncensored Oral History of Suge Knight’s Death Row Records in the words of those who were there.

The upcoming book depicts the rise and fall of the notorious Death Row Records label through first-hand accounts of the people that lived it, vastly expanded with compelling (and sometimes incendiary) accounts not heard in the documentary film. It is also coupled with the story of the high-risk quest to complete the film in the face of relentless death threats, music industry bullying, threatened litigation, financial extortion and street gang intimidation.

Called “the most dangerous story in the history of the music business” WELCOME TO DEATH ROW chronicles how director Savidge and producers Steve Housden & Jeff Scheftel navigated a surreal world comprised of Crips & Bloods, crooked lawyers and cocaine kingpins, ‘gangsta’ rappers and thuggish music executives, and how the team persuaded the key players to tell their story under the threat of retaliation from every element.

The making-of narrative is interwoven with vastly expanded interview excerpts with over 60 former Death Row rappers, promoters, music executives, producers, managers, publicists, lawyers and drug dealers–all eyewitnesses to the label’s phenomenal success, internal battles and violence, and its inevitable crash. The stories that made it into the film pale in comparison to those revealed in this book, including details of an unpaid debt of $3.5 million to a Colombian drug lord which helped fund Death Row Records.

Universal Pictures’ STRAIGHT OUTTA COMPTON  was developed by Xenon as a follow up to the documentary —with Savidge and his writing partner creating the first drafts— acquiring the story rights and ultimately selling the package to the studio.

“Leigh was fascinated with how interesting the NWA element of the Death Row story was” says producer Steve Housden “so we came up with the idea to develop a narrative feature film on the subject.”

Highlights from the book include:

-Details of numerous visits with incarcerated cocaine dealer Michael Harris —original founder of Death Row Records— who attempted to wrest control of the documentary away from Xenon.

-Interscope Records founder Jimmy Iovine’s alleged involvement with Harris and his fears of being included in the film.

– A music executive threatening an interviewee (with a smuggled handgun) —after the interviewee had mentioned details about the Tupac shooting on-screen.